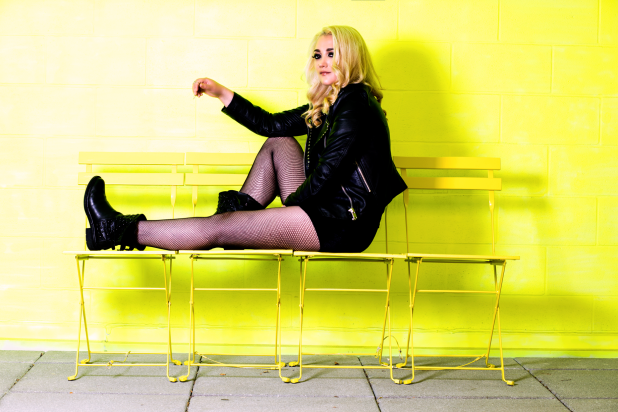 Coming from a small town and calling Southern California home for three decades, people like K-Bust make me all starry eyed. She’s lived in various prominent spots on the map, can speak a myriad of languages, and on top of all of that, she’s a self-taught musician with an electronic sound that pops. Listeners will be able to hear the culmination of her worldly views and electronic pop when her album drops early next year in March. Between then and now though, you can check out what she had to say about her many tongues, homes, hew new single “Over” and more.

Kendra: Now you’re not only a self-taught musician but also a master of tongue. You speak a few languages. What was harder, learning all those languages or music?

K-Bust: I love to communicate and connect with people; it feels like a need to me, to learn from their experiences. On the other hand, music has been a natural way for me to communicate and express my emotions and feelings without words, so I would say that learning all those languages came naturally to me like music, both at the same level. I’ve always been surrounded by music and the main languages I speak pretty much since my childhood. Having members of my family living in different countries, allowed me to be in contact with French and English at a very young age, making the process of learning them a lot easier.

Kendra: You’re able to hold all these various conversations all over the world because to date you’ve lived on a few different continents, so thinking back what has each locale given you musically that we might hear on your upcoming release, Fearless?

K-Bust: Living in Chile, I would say, has given me the 80’s synth pop vibes; it introduced me to all those sounds. Montreal, the stories I want to tell on this record. It’s the place where I discovered who I am; where I grew into the musician I am today, more honest, more sensitive and bolder. Berlin made me discover new sounds that I wanted later to incorporate into my music. Some processed electric guitars and dirty drums, for instance, evoking that tribal/epic type of percussions; it was the starting point crafting my overall sound.

Kendra: What about being in Berlin a few years ago sparked that electro-pop fuse inside of you?

K-Bust: I’ve always loved synths and electronic drums; they’ve always captivated my ear. Being in Berlin made me revisit some electro influenced music, which has a strong presence there, for instance, Depeche Mode has a great fan base in Germany. As well as from working with a local producer to hanging out with friends who made me discover some great new artists that were trending on Spotify back in the day. I think the desire to make an album that sounds more electronic has always been in my head, since I grew up listening to my uncle’s and mom 80’s mixtapes as well, they were the ones to plant that synth/electro pop seed as a musical influence in me, so it was just a matter of time for that seed to germinate, or for that fuse to be sparked.

Kendra: How does “Over” compare to music you released on your 2012 debut?

K-Bust: I think it’s a whole new world, musically and lyrically speaking. I feel that I’ve evolved a lot since 2012, as a musician. Over is more intimate, it’s a journey into a raw and dark place. Musically as well, I feel it taps into that darkness, I want the listeners to plunge with me into those feelings that inspired this song regardless of the language they speak.

Kendra: If you had to fast forward 10 years into the future and were to look back on your experience writing and recording Fearless, what three words would resonate?

Kendra: Time for a game of Cover, Perform With, Duet With featuring Madonna, Sia, and Depeche Mode. So which of those three would you want to perform with, do a duet with in the studio and simply just cover?

K-Bust: Perform with, definitely I’ll go with Madonna; she kills it every time on stage, she’s a great entertainer. For a cover, I’d love to sing “Enjoy the Silence” along with Depeche Mode, I can’t get enough of it. For a duet I’ll pick Sia, she’s such an amazing singer, her voice is really unique and I get goosebumps every time I hear “Chandelier,” it never gets old.

Kendra: Will some shows be coming our way when the album drops?

K-Bust: Definitely, my team and I are working on it; I just can’t wait to hit the stage again. To me, it’s the place where all the magic happens when it comes to sharing the new songs with the audience. For sure there’s going to be a release party when Fearless drops, we currently have some venues in mind for it in Montreal.

Kendra: You’ve lived a lot of places, but if you had to make a mixtape featuring songs that always give you the comfort of home what five would have to be on it?