Remember when they said they killed that gorilla because it was a wild animal and could never comprehend what it was doing? Trigger happy police officers are basically treating black people in the same manner. Shooting them left and right instead of thinking they could possibly reason with them. They are human and speak the same language as you. They were walking home with Skittles, they were selling CDs, they were in the passenger seat of a car while their daughter sat in the back and watched you shoot and kill her father.

You’d like to believe that in 2016 we’d be past the clear cut racism that was once so apparent on an every day basis in this country, but you cannot ignore the facts. There have been multiple instances where a white man has walked into a public place, opened fire and then not been shot by police, but instead taken out alive and given a trail. Can’t recall? The movie theater shooting in Colorado. The church gun down in Charleston. Those men killed strangers in cold blood and are still alive today. You know who’s not alive today? Christopher Kimble, Tyree Crawford, Sandra Bland, Freddie Gray, Trayvon Martin and the hundreds of others who’ve died at the hands of officers since last year alone – last. year. alone. Reading through the list of victims, many were not breaking any sort of law when shot and killed.

Again, over 100 unarmed men and women have been gunned down by police in the last year. If these people were all in once place at one time – would we not call that terrorism or a hate crime? Instead, because they are all separate events, it’s just police “doing their job.” Even then, that white man in Charleston shot and killed a group of black people at church and was led out alive. Black lives, we know you matter – but does the law? Tired of this, I actually just contacted Black Lives Matter to see what I can do to help. I urge you to take some action as well if you are tired of seeing this in the news every other day.

Now let’s talk about the music because I always like to drop some thoughts on you and then deliver to you creative outlets. SixTwoSeven has a handful of dates in August starting on the 9th. Somos will also be heading out in August starting a little later on the 24th and going until the end of September. Something a little more now, The Strokes will be performing at The Wiltern as part of a benefit for the Downtow Women’s Center. Tickets actually go on sale today for that. So a good cause and good music. Then there’s Cobi. I have to say this man may have just released my favorite song of the year and he’ll be out with Augustines soon. Check out the poster below for where he’ll be, and then stay tuned for this week’s video picks. 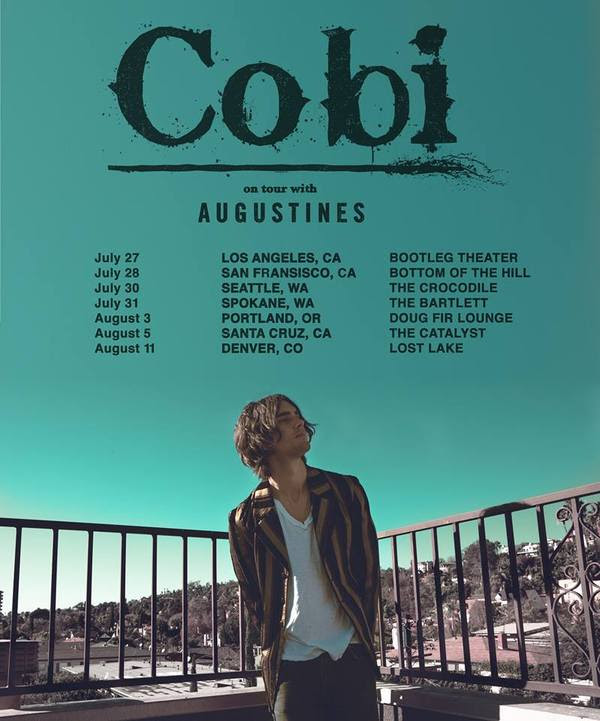 Nader “Take It Back”