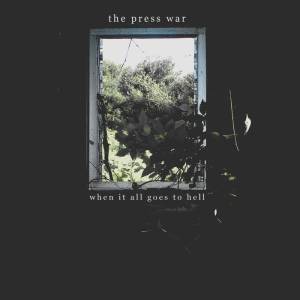 When a new person enters a room, I’m likely to remember their face more so than their name or occupation. I’m all about the visuals and over the years, with so many bands coming in and out of my inbox – I honestly can’t recall them all. However, when I saw The Press War’s album cover from 2013 on the side of their Bandcamp, I thought…now that’s familiar. Yup, then I was crying and listening to their hyper pop rock, today I’m tear free and hearing a band that has grown immensely, but who still know how to have a good time on their latest, When It All Goes to Hell.

New Again had a sexually induced song, but this record started out with a song you don’t lust after but rather, fall in love with. “Vespertine” got things off to a slow start, but with those beautiful and strong vocals…the pace was welcomed, because you wanted to be drowned in every second. Just under two minutes long, it was over before it began and in ran “I’m So Bored With Us.” Here was the hyperactive guys from a couple of years ago. Overall I’d call this a band with pop punk roots, but a pop rock shell. This track and “Kill You (Indie) Darlings” are proof of that. Those were the only ones showcasing that All Time Low like factor, so back to the more mature men The Press War are now. “Follow Me” unfortunately lost me, but “Lost Boys” brought me back with the simplicity of the line, “I’m fine, overwhelmed.”

The last time me and The Press War crossed paths I was a mess and they were a group of dudes all about the fun. Today I’ve cleaned up (a little) and they’ve grown (but not too much). We’ve both made progress with maturity, but I’ll admit they’re doing better. They have When It All Goes to Hell, a great pop rock record with bursts of pop punk to keep things light. It’s out now, so get on that – now!