One of the coolest jobs in the entertainment business has to be the guy or gal who chooses the music for film and television – TV especially because that’s my number one love. Imagine being responsible for creating the mood with music when Olivia Pope does something badass, or back in the day when Rachel got off the plane. Well The Rocketboys scored with that guy or girl decided they were right for scenes in a huge MTV show and for a Fox show that recently took its final bow.

So you may’ve already heard The Rocketboys and not have even known. Possible? Yup, but now here’s your chance to get to know these Texan boys who just want to rock a little bit more. Like the fact that when they toss some back they’re usually  512 IPA or Real Ale’s Lost Gold, what they ate when they heard themselves on Glee, and so much more.

END_OF_DOCUMENT_TOKEN_TO_BE_REPLACED

It’s always funny when a record comes through at a time when it just needs to be in your life. While I wasn’t so big on the sound of Gone By Friday – it was a little too raw, too Sum-41 for me at times – I absolutely loved the lyrics. Almost 30 and still finding myself attaching to words about being a loser. Only instead of being one because of a lack of party invites, it’s being one due to sucking at this thing called life. That’s what Quarter Life Crisis is all about.

If you’re a fan of that pop punk that’s more like New Found Glory’s Nothing Gold Can Stay, then this is record for you – soundwise. It’s not perfect by any means, but that’s where the punk mentality comes in. Enough about that because that’s not what I liked at all. For me, it was all about the lyrics. “The Hadean’s” “I’m a wreck but I’m not done yet” and wasting time in “Poison Jam.” Those are words that stick out to me, especially after a temp agency basically said I was a waste of their time due to a lack of office experience last week. It wasn’t all pitch imperfect though. There was some sweet to this record with “600 Miles.” It started off making you think it was a full on acoustic gem, and while it sped up a bit – it was still something different that broke up the record in the middle of things. Sadly though “Say My Name” is not their rendition of a Destiny’s Child classic, but they end strong as hell with “The Story So Forgotten.” It’s one of those songs that you know will make for a great live sing-along.

While it wasn’t my cup of tea musically, it was a great listening experience nevertheless thanks to lyrics that aided me as I’m not feeling too hot in the job part of life. I mean, I’m happy blogging but it sucks when the outside world views you as a loser for it. It gets to you, but you have to remember to be like Taylor, shake it off and move on. Singing along to Gone By Friday helps with that. So if you’re a fan of pop punk and need something to help because you’re feeling low, check out Quarter Life Crisis, out March 31. 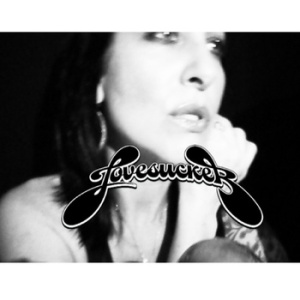 Back before I was born, during the decade Dazed and Confused was set – funk was really big. It was this type of music that has since left the mainstream but has left remnants here and there. Today it can be heard sparingly on the charts but there are very few artists who take it on and do the funk masters of yesterday proud. One of those artists is Lovesucker. Their self-titled record takes funk, twists it up in an alternative way and adds a dash of other elements to create a style that makes them a sassy musical treat.

Kicking things off with “Mississippi,” Lovesucker sounds like a record that would sit next to the likes of Fitz and The Tantrums. As they show you more, “Show Me” shows off a very sensual side of the group that encases a lot of soul. It’s weird and it’s not like I listened to him a lot of have seen him, but “Don’t You Leave Me Now” sounds like a Kid Rock song. Okay, not the whole thing, but the start does have a Southern Rock feel to it that gets played down as the track goes on. Lastly, they may want to reach out to Chevonne and The Fuzz to do some shows together because “Guns and Gasoline” would fit in perfectly with their crowds.

Funk may not be the powerhouse it once was, but it’s still a force to be reckoned with when put to good use. It’s a style that not many can take on, but Lovesucker has managed to take it and make it their own. If you’re a fan of funk, check out Lovesucker, out now.