Bad news on top of bad news, that’s what another Monday has brought me, one of the only shimmers of positivity was the Counting Crows Underwater Sunshine (Or What We Did On Our Summer Vacation) waiting for me. Yes, I only own the Best Of, but there’s something about having the chance to hear an album by a band I constantly compare artists to in my line of work, that’s surreal.

So used to taking on pop punk EPs and post-hardcore albums, Counting Crows 15 song long album was a task, but one taken on with a smile. I sat in the midst of a heated Jeopardy. Well who knows if it was a runaway? I was paying attention to the Crows. “Untitled (Love Song)” opened the album and I found some sort of secret beauty in the idea of love being untitled, rather unable to label. No wonder leading man is also a notorious ladies man. When my swooning was done there, the easygoing and somewhat somber pace of “Start Again” reminded me of R.E.M. and had one line that ironically repeated, “some thoughts just won’t leave my head” as Adam Levine took my TV screen.

The familiarities that Counting Crows fans will attach themselves to is the unison of the group in the choruses throughout the album, especially in “Meet On The Ledge.” Those harmonies along with a new element, which we’ll get to in a second, reminded me of a long drive through Topanga Canyon. The winding roads ending at a hippy chic pad where Counting Crows are waiting to shower ears with their sound.

Now the new…Remember when Hootie went Country? Well Counting Crows haven’t crossed that threshold fully, but there were a few times I was thinking of adding them to my County playlist due to the hints in “You Ain’t Goin’ Nowhere” to the Bluegrass texture “Amie.”  I might just have to when Underwater Sunshine hits the masses April 10th.

As the sun set on this one, I was hoping something like “Mr. Jones” would come on, but with that song being almost 20 years old, you can’t expect them to play the same note this far down the road. So I wasn’t that bummed out and happy that today of all days, a little reminder of musical happiness was dropped into my life. Underwater Sunshine is a little bit country, not a lot of rock n’ roll and has an abundance of emotion that comes across as genuine as each line escapes.

Make sure to get it when you can on April 10th and see them on tour, which gets underway the very next day on April 13th in Seattle, WA and wraps up May 5th in Nashville, TN (fitting?).

The Key Club is often a quiet site sitting at the edge of the Sunset Strip. Once home to many of my college nights, it’s rare that I find myself there with the underground bathrooms.  The women’s’ having a makeshift boutique. The men’s who knows, I don’t have the equipment to use it. But last week I ventured there. It was a scene of youths, older ladies waiting for Cartel and way too many fraternity looking dudes who looked like they just strolled in to see “what’s up” on a Saturday night. Before Set Your Goals took their position as the headliner, Boston’s Super Prime played to an opener sized crowd.

The 20-something aged trio came out with a lot of energy to do their best to win the crowd over. It was easy to spot the Blink influence in the fast pace of the music and in the way Austin (bass)who looked like a mini Dave Franco, did a Hoppus stomp from one side of the stage to the other. Before their album dropped on 3/20, I was able to listen and I expected to hear an upbeat, pop ridden set. My expectations weren’t met. Instead of that, they sounded more mature.

Their drummer, Marcus who loathes the recorder, said their new album #FML was a combination of two previous EPs with a makeover, that caused the more radio friendly sound, but as far as live, he said, “We want to move on and mature. These songs were written a while ago, like two years ago.” So what you hear on the record is definitely harder live, and songs like “Brickski” came across just like that. Sadly though, I wanted to hear “FML” just because I thought it’d be fun, but the Mumford and Sons cover made up for it.

END_OF_DOCUMENT_TOKEN_TO_BE_REPLACED 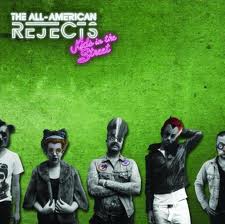 A new album by The All-American Rejects is like Halley’s Comet in that it takes some time to come around, but when it does, you’re left with nothing but a smile. I told Nick Wheeler of the Rejects in 2008 that I was barely getting my feet wet in high school when the first album came out, planning on college with the second and in my senior year of college with the third. So I sit hit a few years after getting my BA on my living room floor reviewing the forth and I couldn’t be happier about it, bottom line. This setting comes after sitting at work all day with Kids in the Street on repeat.  Not skipping a single track and texting my friend every now and then, “so good!” …Give or take an emoticon smiley face.

“Somebody’s Gone” took the job of being who I met first on the album. And the impression was a lasting one. With the Rejects, predictable pop lyrics aren’t a problem. It’s what’s taken them this far, and I felt not only with this song, but with what followed, their pop had matured. When you think back to the infectious “Swing, Swing” and “Move Along,” “Somebody’s Gone” isn’t that upbeat radio hit. It’s more low key in taking over your thoughts. But then there is the first single, “Beekeeper’s Daughter.” From the title, I scrunched up my nose, thinking it can’t possibly be good. Why do I dare doubt these four men?

While they continue to be on point to not disappoint longtime fans, they always keep in mind the rest of the world. They know how to construct music that translates to a general audience. In the future when and if they perform on Ellen and do “Kids in the Street,” I can picture my mom calling me to tell me one of “my bands” was on Ellen and how it’s “her song” now. And since we’ve stumbled onto “Kids in the Street,” it’s a song I think you listen to more for the lyrics and less for the fun of it…which is weird for a lot of mainstream songs.

There wasn’t a dull moment for the record. There were songs that took the energy level down, and where id’ usually skip, my hand was still. Tyson Ritter’s voice just has a pull to it that can only be compared to audible gravity. With the more lovey dovey tracks, you want him aiming those enticing blue eyes at you. Whether it is “Affection” or “Fast and Slow,” you’re left with the vapors

There’s a few bands that I’ve been able to grow up with and actually stay a fan of, The All-American Rejects is definitely one of them. Kids in the Street earns them a notch in the maturity department when it comes down to their musical growth, which is great news for their diehards who’ve grown a bit over the years as well. And any newcomers to the Rejects spectrum will appreciate the universal appeal of each song when they hear them dominating the radio over the next year or so.

Kids in the Street is out now and they’ll be all over the country after that and then are heading overseas to spoil the UK for a bit. And if you’re in LA, I hope to see you at their Troubadour show on March 30th, going to be so good!